Sewing, blogging and a dog--and not my dog!

I don't know where to start.
Firstly,about blogging.... I found a page to print to keep my blogging, and sewing organized. I have so many orders to do I almost forgot about a sewing swap I'm in that is due this week! So I printed this 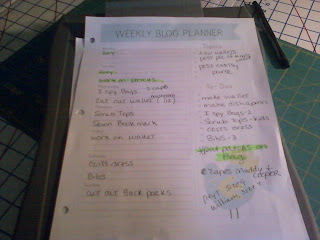 from Here...
I wrote down everything I need done NOW and put 1-2 items to each day and if I stick to it then ,well, I will be organized and on time!!! ya ya ya,, lets see how it goes after tomorrow lol
But I got today's done and marked off! Actually after looking at it just now its more like a sewing to do list then blogging. = / ok on to sewing......
Secondly: sewing.....
I made this today.. well not the actual bag but the husband unit (Doug) wanted me to sew some of his Air Force patches onto a "helmet bag" He has TONS of patches and I'm like ut oh.. but he gave me a few of his favs and told me to put them on which ever way. Here's the front.. 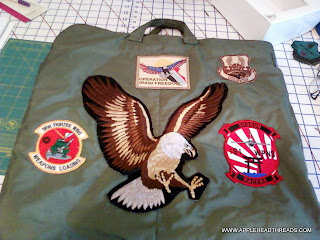 He served in Iraq and Desert Storm.  We lived in Turkey during this war with two little kids and was a bit scarey but I loved living there! Maybe another blog story in the future !
He was in Japan for abit too , but I didn't go then. It was a short trip..but anyways......I get off track sometimes...I sewed these patches on for him and this is the back.. 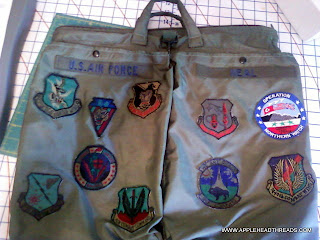 I put his Air Force tag and name tag on this side like they wear them on their shirts. I'm a bit sore from sewing this because he wouldn't let me take the back pockets off here. I guess he was afraid I would mess them up! lol
But I had to twist and pull and tug and .......cuss alot to get my machine down in those pockets! good thing they weren't lined and very thin!  I was so glad to get this finished!
He was happy with it though..thank you very much...
What is he going to use it for you ask?? Guns, bullets and that sortof stuffs. Carry his ammo and pistol in I reckon??
Ok more sewing... I made a fat wallet and was going to put on Etsy to sell but wasn't happy with the middle card slot pockets. I CAN NOT SEW BIAS TRIM ON FOR THE LIFE OF ME!! ugh!!!!!!!!!
I took it apart three times with 3 different sizes and sewn them two different ways.. I have to keep trying because I have two orders for these wallets! eek.
I showed this to my momma and she liked it so I gave it to her.. I told her well you made the bias and gave me the fabric anyways! lol
I love plaids and linen together!!! 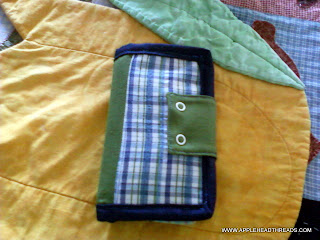 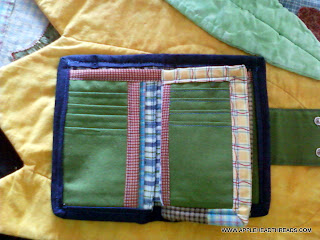 not too bad huh? 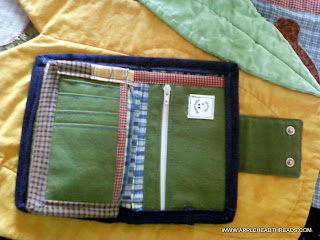 so so I guess.. the zipper is straight! 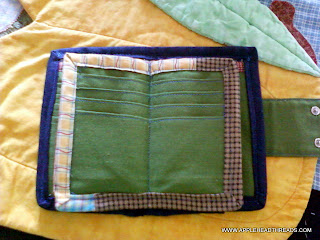 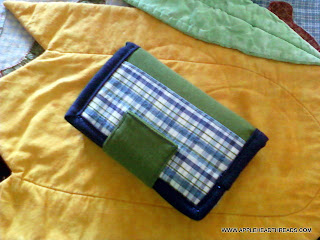 aww pretty and so straight..
Well that didn't go too bad.. I need to take a picture of the sides. Did I mention this wallet is fat?? It's like a small book. I think thats why I like it! I love books = )
I forgot to iron this too ....so sorry mom!
Part Two sewing....My friend was selling a few things and she had this in her car and well I snatched it up! I thought it was empty but......... 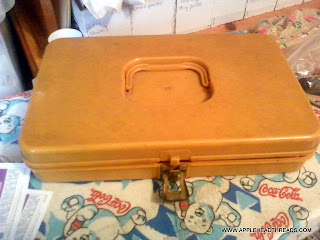 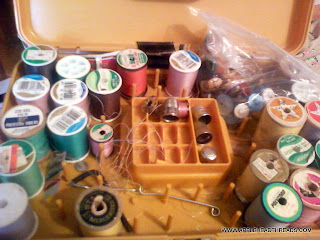 I opened it up and wow! REAL metal thimbles! and a couple of wooden spools and needles and even a old metal shoe horn lol (can't see it here) and a bag of old buttons.. some rusted bobbins but hey they still work eh??
She wanted $2 for it but I gave her $5 since she my friend and well I help my friends out.. = )
I have a small orange sewing box just like this but deeper and need to find the top try for it and that would look cute on my shelf in my craft "studio" lol
I get excited over small things .((((.warm fussy feeling inside )))
Ok my arms are getting tired of typing so wrapping this up......the dog bit.No not the dog bit anyone.. just the dog part bit.. oh never mind...
Some moron dropped off a female dog at our house.......again..sometimes its cats, sometimes puppies.. ugh. This dog is so nice and sweet. Shes had pups because she still has milk and I worry about those puppies that I can not find = ( I HATE it when people do this! stupid people!!! We can't keep her but she seems like a good dog. Wants petted and when I feed her she sits to the side and waits.. even as hungry as she looks too! Shes a pittbull dog too and thats weird because they can be expensive dogs and people breed them. Well it looks like someone did already to this one!
Anyone want to adopt a good dog??? = ) I deliver!! lol
I like to find people that do this and drop them off in a amazon forest somewhere and see how they like it!
See ya in a couple of days with more sewing projects finished!!! I HOPE!!!!!!!!!!! I'm putting the list to the test!! he he he he he
Posted by Suzee