I think finally we are out of winter! Cold nasty wet weather . No more bundling up and having to go warm up your car, no more snow or mud tracked inside the house. Its been a mild winter so I shouldn’t complain much , but did I tell you I HATE COLD WEATHER.period. I never complain in the summer.
I do complain if our AC has went bonkers and we can’t get a repairman out for 2 days.. now that I complained about! But tomorrow is officially Spring and it has showed herself about two weeks early. GRINS.
I probably jinxed it and will wake up with 5 feet of snow tomorrow…

I started my spring cleaning couple weeks ago too. I think I talked of it already.. I also made out a weekly cleaning schedule. It keeps me on my toes and my house looks refreshing and smells so good! No, my house didn’t look like a piggy sty or stink but it was dusty and unorganized.
Its been a 3 ring circus with my son living here temporarily and having Zoey here 4-5 days a week. I’m not a person to care how messy the house gets as long as its picked up by the end of the day. I have Zoey helping me some..SOME, and she is learning. But after your kids move out and you only have to pick up after one person(Doug) instead of a household, you get use to having it tidy.. I hate cleaning more though and keeping it picked up on a daily basis helps!
My son usually keeps his mess’s to his room, so I just shut the door.

I haven’t really sewn much since been cleaning. I made one purse with some really happy prints! Someone gave me some fabric back in December and I forgot she wanted a purse from it.. oops. Glad I never used it! 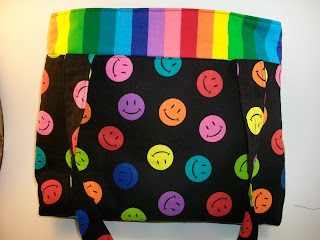 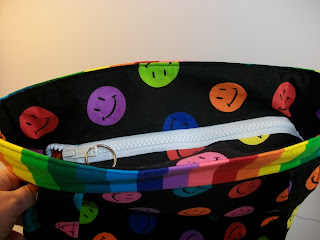 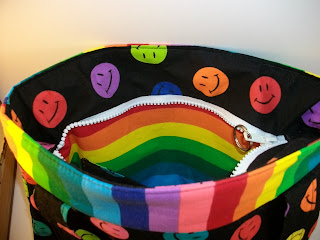 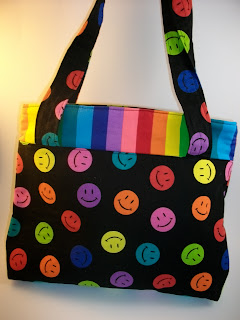 I used a free tutorial from Jane at ProjectsbyJane.
It was my first time putting in a recessed zipper. It went well and I hope the zipper works out ok. I used a big wide tooth(teeth?) zipper.

I finally got my Etsy items listed. Maybe list a couple more things soon, but starting in April I’m dedicating at least the first 2 weeks to sew clothes for Zoey! I got patterns ready and have ordered new fabrics! And I’m going to attempt to make me a couple pairs of capri’s. I don’t wear shorts lo

I’m also going to be making more fabric shopping bags like I did last year. I’m going to donate them all to my local library for them to sell. I have sold a few last year.


I had 3 HUGE plastic bags full of teeny scraps I was going to take to Goodwill recycle center until my sister informed me she wanted them. I’m like.. they are too little to sew with. But she said she makes wreathes and needs it for stuffing.Oh. So that worked out!

I hope the weekend went well for you. Me and Doug went to the shooting range and I got mad at myself. I got this new gun and I can’t even shoot it. =( I have no strength in my right hand. NONE! I had surgery on my neck and my shoulder few years past and over time my nerves and muscle's are shot to high waters. Not only I can not pull the top of the gun back to start shooting it I can’t even hit the target any more. So I told Doug well if I needed to use it , it will have to be short distance lol But will go back to practice more til I get it right, and probably do some arm curls at home...

I am baby chicken sitting.. for just two little chicks.. my youngest son bought them and asked if he could keep them here. They looked half dead and think he was keeping them in his car. oh boy. We are wanting to build a coop anyways so this is just a start to our little group of chickens. UPDATE: I didn't post this yet until later in my day but after talking about those little chickens, I went out to put their crate in the sun to get warm and on of the little fellows was dead.. =( The other one is doing good and enjoying the sun.
She peeps at me when I go out the back door and gets excited.. I'm a chick mom now lol

I had to set the crate up on the AC unit so the cats wouldn't get to her.. There has been 5 stray cats hanging around because one of the females that happen to get up in Doug's car from work came home with him. So now I have to find a home for her as I can not afford her and kittens, let alone get her fixed!

Ok I’ve blabbered on already.. have a great week!!
Posted by Suzee