Do any of you remember me talking about Pay it forward I entered? Well you sort of win it but will tell you more later in this post..so pay attention!!!

I received this cute little notebook from Suzanne over on girlforallseasons yesterday!! 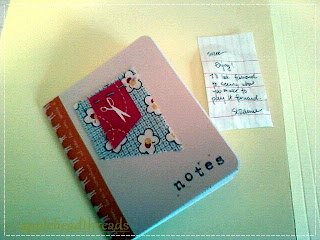 It has washi tape on the edges and look at the sewn on scraps and stamping!! It's so little and cute I don't want to use it!! She wrote a little note and you might not tell here but its crinkled up a lot.. Zoey was over  and well.. she snagged it up and took off running with it because she got mad at me as grammy wouldn't let her have that cute little notebook!! I gave her the envelope it came in to maybe out smart her thinking that was the main thing.. no. Did not work. She has her love for stationary products like her gram-ma and mommy.

Since I received my pay it forward I get to play along now and its my turn!! yay!!!

Heres the deal....
The first three people who comment on this blog post will get something handmade by me in the next 365 days! The only catch is that you have to agree to play pay it forward on your own blog–so you probably need to have an active blog to qualify.
Thats it!!!
I can't say what I'm going to make to send but I have a couple of ideas brewing up!! And I promise it won't take me 365 days to get it sent!! Maybe a month or so max! I would like to get it done before the holidays,but will see.

Email ThisBlogThis!Share to TwitterShare to FacebookShare to Pinterest
Labels: notebook, pay it forward