I'm back.
I finally took some pictures of some of Zoey's clothes I made so far. And the pic's aren't that good as I had to use my phone again.. She had her daddy's camera, the one I have been using to take pic's and she wouldn't let me have it back. She kept saying.. nooo its Daddy's! WELL.
I finally found it today on daddy's windowsill .. I believe we are going through a the terrible two's. I did not have problems with her daddy at that age and was hoping she wouldn't go through it either. This last week we had her 5 days in a row and I'm just thinking she was missing her mommy. She not one to cry for her daddy or mommy as far as being homesick. Only when she gets in trouble lol
This is sort of funny but little sad. I heard my son telling her NO really loud. I thought ut oh. Then I heard paddling on the bum. (diaper on isn't considered a bad paddling lol) She comes running in to the front room where I was and (not crying but with a sad face) "Daddy not my friend no more" LOL I hugged her and asked "well what did you do to get in trouble?" Son yelled out.. trying to stick her finger in the fan! Oh. I told Zoey "well he does love you and didn't want you hurt." so I told her to go be friends with daddy again. She ran back to the room and I heard her in a little voice say.."Daddy, I'm sowry." awwwww Sometimes it turns out good.

We had our little Easter together and that turned out great. She wore her pretty dress and took lots of pics and videos and then found out she wan't wearing the pretty hat to match her dress.. well crap.

Here is our Easter girl having fun. 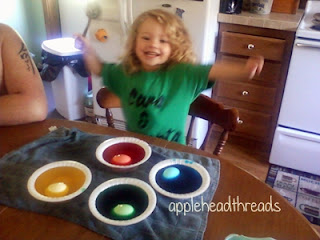 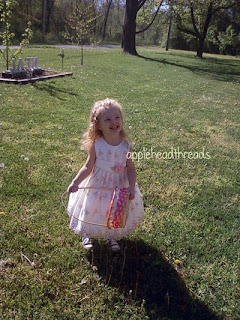 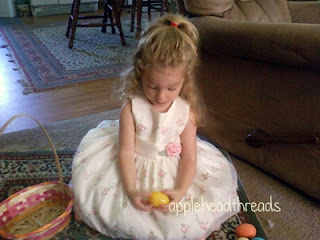 Her Daddy. and her friend now lol 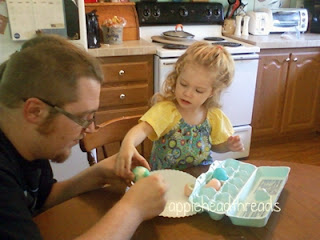 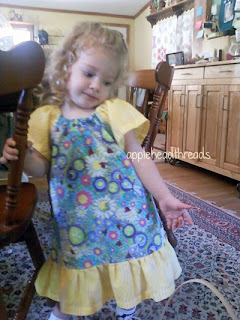 And here are the clothes I made last couple of weeks, but this first dress I made today. I used a old shirt of Doug's, kept the neckline on the front. added the shabby not so shabby but really shabby roses on the bottom....I can not do shabby and look shabby. they look crappy lol  I used a tute from Here that I found on Pinterest.. ( yes. I went back.) lol hush. 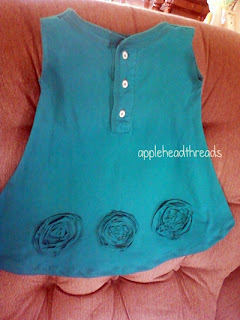 And I apologize for the shabby crappy photos too... I also chased the sun around today in the house so I wouldn't have to drag out my photo box.. lazy lazy lazy 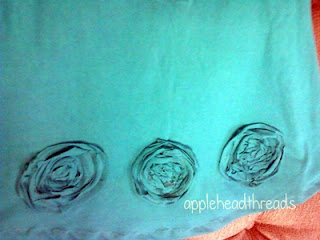 I made these magnet letters for her basket. So far I had to put them up twice. She keeps trying to stuff them under the fridge. I thought she would out grow that! I still have to make more vowels so she can spell words out ...( and thank you again Sasha for supplying most the pretty scraps!) 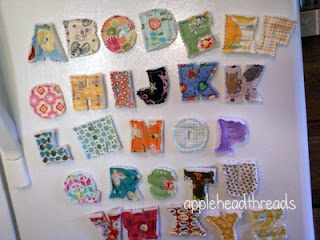 Three longer style shorts.. Zoey does not like the Garfield ones. I thought it was because they were longer. she likes the other's. But I'm thinking the elastic is tighter.. so have to fix that. 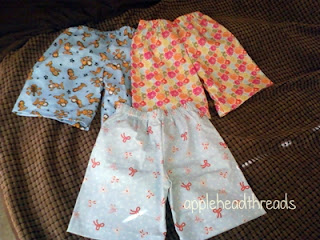 I made 3 of these knit shorts.. can't find the third pair...probably dirty. 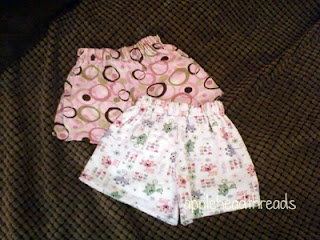 And of course the skirts! 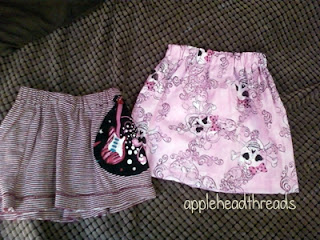 I've decided to blog just once a week. Write it all down as I want to blog about and get it all done in one evening. I just have to make use of my time and that is one thing I have to do. I've been doing a lot of re organizing things in my life to make it easy for ME! . period... hehe
I got a menu binder with weekly meals I do and been keeping at that..
I re organized my coupon binder and went from a big ass binder down to a small one that you buy in a Dollar Store. yep I still do alot of coupons but I am doing it on a smaller scale. (and it fits in my purse easier)

Last thing, I am in the process of switching my Etsy store over to my Appleheadthreads name. I have been using my store under just my name. I opened it first to buy things and just added the shop to that.. but been thinking I want it easier to search. SOOOOO doing a complete switch over is going to be hectic as I don't want to lose my contacts or people that have favorite'd me and etc. I will let you know the new site landing page as soon as its finished.
have a good week!