I had to wait to post these so my friend would be surprised for his birthday gift! He received it today and loved it very much ,  = )

Since he was a former Marine I made the catch all tray in fabric I knew he would like a lot.

I had some Air Force fabric made Doug one as well. He thinks they are neat. I took a picture with his goodies already in it. Men “things”…. knife, business card to a gun shop, a key to gun some sort of cabinet?? or maybe it’s the lawn mower key.. dunno? And his note pad left over from his military job. It has weird things it in and I don’t ask.. lol I found this tutorial some where a while back and forgot to write the page down and can not find it.. so I’m going to direct you to…. NOODLE HEAD again!! She has a link to Skiptomylou blog for the tutorial..or you can just click that one and it will go there … (Do I make things more difficult then it should be??? ) 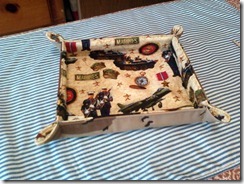 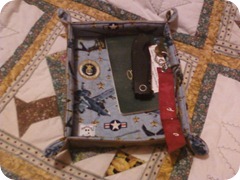 I got a package from Julie today from The Intrepid Thread Etsy shop. I had to order some FQ’s of the Little Apples line.. sooo cute. My new fabric stash is starting to pile up so I really need to get busy and sew something's to sell.. 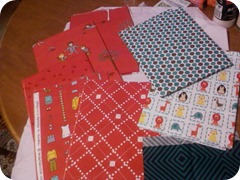 I got a email from something called TabJuice . Its to sell your products off of Facebook and they won’t charge nothing like Etsy . Was wondering if anyone uses that or heard of it? I haven’t read it deep yet but looks like something I would use..FREE for me is good!!!

I had my little Zoey bug today.. We played in the “fort” I made from the recliner.. with a quilt draped over the back of it while it was reclined.. I thought it was nice and comfy and was laying there and said, wow Zoey this is nice, lets nap.. She smacked me on the forehead…So I guess that was a no.. (it was dark in there so its not like it was granny abuse or nothing!)

I’m making a new page for tutorials I have used and hope to get that added here soon!! I like supporting my fellow crafter’s! And they put in a lot of work to put those tutorials out there for us to use.

I have a eyeball ache. maybe its in both eyes.. but its very annoying! I really need to stop staying up late to read!! = ) or it might be all this rainy weather that we needed all summer long!!

I think I pushed Autumn a little early? Its not officially until next month but..who cares, I’ve not been known to go by the rules!!!! Like my new header!!???? I love making these. I got this one from Shabbyblogs , then added my photos using PhotoScape.