Another order finished.......and I don't forget

I love this wallet.. but…….its driving me crazy!!! It was going along so well then I put the bias trim on the final step and it turns out………YUCK! I took this bias off 5 times!! Tried it many ways, finally I made the trim a bit bigger and put it on OVER the bias already on there. hehe. It turned out ok , I guess.. I’m very picky about the outcome of my projects! If I would receive something I ordered and it looked crappy ,well, I wouldn’t be happy …but I know I’m not the PRO of sewing but it just needs to look pretty…… = )
I’m sure the customer will love it though, I do like the color choices she wanted! 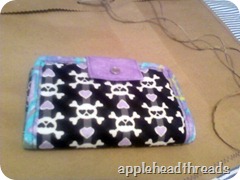 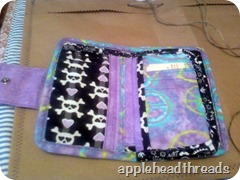 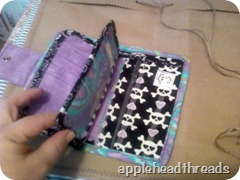 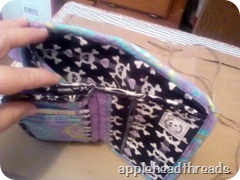 I gave one to my mom awhile back but she gave it back and gave me a idea to leave the middle card slots out and make it a tad long to fit a checkbook in. I told her, kids now a days does not know what a check book is.. lol that’s why its this size! I think I’ll make one to fit a checkbook in and see how it goes.AND with out the trim!! I’ll do it the old way and turn it..
Ok its all set to deliver !!! 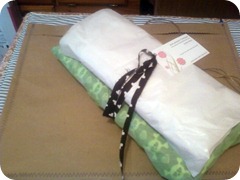 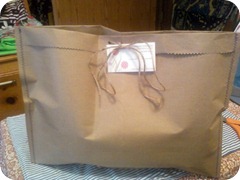 I wrapped it in tissue and then used some scraps left over to tie it off.. When I can hand deliver my items I love to make the package.. I cut the paper to size and sew it on the sides then punch holes in the top and add twine to tie it up.. so cute?? I sometimes stamp all over it too… Last Christmas I put a lot of my presents in these, different sizes.. but sewn them all away around.. I think it might be archived in the December on the side there..
I think I’m going to take down my Etsy store.. I was so happy to get this but trying to type all that info out for each item is a pain, I am waiting for it to come up due again in November then I’ll take the items off. So look for a sale coming up for those! I get more orders from  around me to be happy anyways.. and busy!!! Etsy is SOOO huge with all sorts of items too. I shop there and love all the choices.

I started a purse today using a soft leathery snake skin looking fabric.. I LOVE IT! At first I was ....hmmm dunno about this one.. Its a order so I'm hoping I don't like it enough to keep for myself..hehe. Don't worry Dana, its all yours!!

Ok hope everyone is having a nice weekend.. Tomorrow is 9-11 ten years remembered...
I think of that day alot and just not on the yearly day it happened.. God bless everyone that died that day and their families.....and yes I said GOD as I'm American and proud of what I believe in!! = )  Two things I don't like to talk much about on the blog or Facebook,etc is religion and politics. not that I couldn't fill your ears with them both..
I found this poem a few days ago wanting to post a little saying about that day and this bought me to tears.. I think of my daddy when I read this.. he served in WWII and lived to tell me stories.. he didn't go into detail , as I was young, but told me of his adventures and people he met.. but I wish he stayed with me alittle bit longer in life to tell me more.(and to just be here)  I miss him after 25years and think of him alot. When I was younger I wanted to join the military just like my daddy..I think it was a childhood daddy hero thing but I didn't join, my husband did. He served from 1984 to 2009. Seven years of that was Air Force, the other was Air National Guards, where he retired from. If you want military history he's the one to talk to! Ok here is the poem..

Here is the poem taken directly from  www.celebrate-american-holidays.com

The following 9-11 poem was written by Paul Spreadbury on September 14, 2001. Some have criticized Mr. Spreadbury for content, grammar or style. Yet the simple words were an attempt to explain to his young child what happened to those who lost their lives.

Two Thousand One, Nine Eleven~ Paul Spreadbury, York Beach, ME, beesboy@earthlink.net
Two thousand one, nine eleven
Five thousand plus arrive in heaven.
As they pass through the gate,
Thousands more appear in wait
A tall bearded man with stovepipe hat
Steps forward saying, “Lets sit, lets chat.
They settle down in seats of clouds
A man named Martin shouts out proud
“I have a dream!” and once he did
The Newcomer says, “Your dream still lives.”
Groups of soldiers in blue and gray
Others in khaki, and green then say
“We’re from Bull Run, Yorktown, the Maine”
The Newcomer says, “You died not in vain.”
From a man on sticks one could hear
“The only thing we have to fear.”
The Newcomer said, “We know the rest,
trust us sir, we’ve passed that test.”
“Courage doesn’t hide in caves
You can’t bury freedom, in a grave,”
The Newcomers had heard this voice before
A distinct Yankees twang from Hyannisport shores
A silence fell within the mist
Somehow the Newcomer knew that this
Meant time had come for her to say
What was in the hearts of the five thousand plus that day
Back on Earth, we wrote reports,
Watched our children play in sports
Worked our gardens, sang our songs
Went to church and clipped coupons
We smiled, we laughed, we cried,
we fought Unlike you, great we’re not”
The tall man in the stovepipe hat Stood and said,
“Don’t talk like that!
Look at your country,
look and see You died for freedom, just like me”
Then, before them all appeared a scene
Of rubbled streets and twisted beams
Death, destruction, smoke and dust And people working just ‘cause they must
Hauling ash, lifting stones,
Knee deep in hell, but not alone
“Look! Blackman, Whiteman, Brownman, Yellowman
Side by side helping their fellow man!”
So said Martin, as he watched the scene
“Even from nightmares, can be born a dream.”
Down below three firemen raised
The colors high into ashen haze
The soldiers above had seen it before
On Iwo Jima back in ‘44
The man on sticks studied everything closely
Then shared his perceptions on what he saw mostly
“I see pain, I see tears,
I see sorrow - but I don’t see fear.”
“You left behind husbands and wives
Daughters and sons and so many lives
are suffering now because of this wrong
But look very closely. You’re not really gone.
All of those people, even those who’ve never met you
All of their lives, they’ll never forget you
Don’t you see what has happened? Don’t you see what you’ve done?You’ve brought them together, together as one.”
With that the man in the stovepipe hat said “Take my hand,”
and from there he led three thousand plus heroes,
Newcomers to heaven
On this day, two thousand one, nine eleven.