Have you heard my brother?? 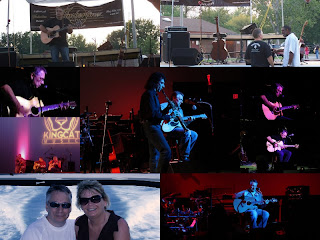 I'm so proud of my brother.. he plays fingerstyle guitar and has his SECOND cd coming out! I love listening to his music and its so calming.
the following is copied from his site..


About 3 years ago Ron won a State Fingerpicking Championship in Kansas. Ron said he could have won first place if the other guy knew how to make a mistake.
Ron is currently working on a new CD "Acoustic Dreams" which will contain most of his original compositions. The CD should be released 2011.
In addition to his solo guitar work, Ron is now accompanying the Award Winning Singer Songwriter Karla Bauer on her tours across Missouri and Kansas. Karla has released two CD's and together they have teamed up with some unplugged versions of her original songs along with Ron's fingerstyle work. Watch their calendars for a event in your location (www.karlabauer.com).
You can preview his songs and register to his webpage for latest show's he will be attending and playing!! Go check the site to support my brother !! :)
(I'm a "pushy" sister) hehe
Posted by Suzee